Bloodroot, the Herb They Want Forgotten

Glancing through the posts released and supported by allopathic medicine and big pharma, you might wonder why the medical establishment hates this plant so much.

Recently a herbalist who was forced to remove a link from his website to a research article about bloodroot. Valid research, but apparently not ‘appropriate’ for commoners to read.

Medical Use of Bloodroot

In the past, doctors who used bloodroot salve in clinical situations suffered strong disapproval from the medical establishment. Frederic Mohs was the first whose work (using ‘bloodroot paste’ with zinc chloride) found wide acceptance as Mohs surgery for skin cancers. Read what doctors are saying here, here and here.

Bloodroot opponents ignore the fact that dermatological surgeons are still using bloodroot salve, and are finding it effective. They use the salve to separate the tumor from the surrounding tissue, but then remove the tumor surgically. They could not do this if the salve reacted with normal tissue.

There is much proof on the ability of sanguinarine (the main alkaloid in the root) to kill cancer cells. Almost every study recommends further work to develop  a cancer treatment using sanguinarine.

Bloodroot has also proven to be antibiotic and antiviral, as well as anti-tumor. Users report many benefits from taking it orally, especially with gingvitis, respiratory problems, circulation problems, and eye problems resolving.

How It All Began

This shy forest plant of North America was long used by the native peoples as medicine for many things, including cancers. Early settlers called it ‘Dragon’s Blood of Canada,’ and later the botanical name became Sanguinaria canadensis. Herbalists began to learn the medicinal properties of the plant, and found it very useful for many different conditions – including cancer.

Bloodroot salve (the escharotic) has been used for about 150 years. Herbalists made it using the Paracelsus formula from the 15th century: a combination of a botanical and a mineral caustic. When an escharotic comes into contact with a neoplasm or tumor, it starts a reaction that leads to death of the abnormal cells. These dead cells become eschar which is scab tissue.

Mainstream media has nothing good to say about bloodroot, or bloodroot salve. They show stories and pictures of unfinished treatments, and tell us that this is the final result of the treatment. Three main horror stories have been used and re-used over the past twenty years. Two of these show pictures of women that are obviously post-surgery, and tell us nothing. One of these women admitted during deposition that she had removed the skin from her nose with nail scissors so she could get an insurance payout.

Media held up this man as an example of the horrors of bloodroot. Of course they only showed the first picture, and not the second one that was taken after healing. See pictures and story here.

We the People Say…

Make sure you are well informed before using bloodroot. There are tens of thousands of us who have used bloodroot, both orally and topically, and are happy with our results. Find out more here. 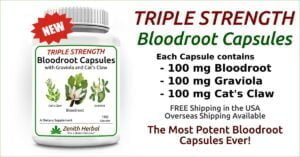